More on the topic of
Roe v. Wade

In 1973 in Roe v Wade, the Supreme Court found an implied right to abortion in the Constitution. By the end of this term in June, it will rule on a case - Dobbs v. Jackson Women's Women's Health Organization - that challenges the continuing validity of that holding.

Professors Helen Alvaré of George Mason Scalia School of Law and William Saunders of The Catholic University of America will discuss the prospects for overturning Roe.

Below are three readings that will provide background to the discussion. 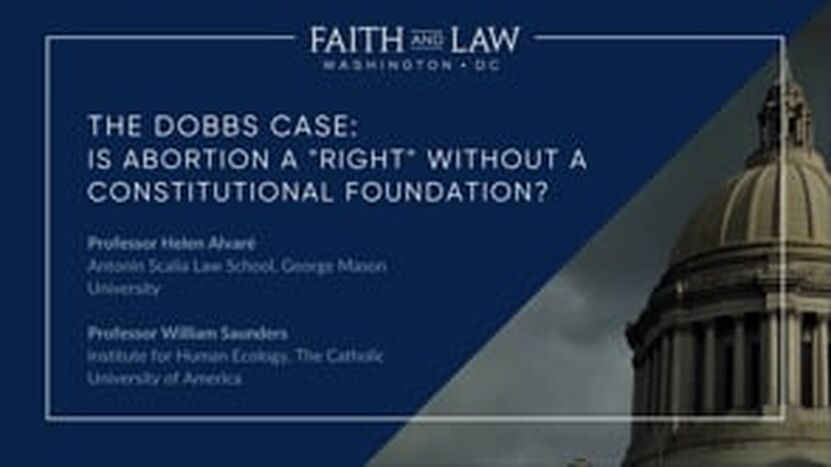 Helen Alvaré is the Robert A. Levy Endowed Chair in Law and Liberty at Antonin Scalia Law School, George Mason University, where she teaches Family Law, Law and Religion, and Property Law. She publishes on matters concerning marriage, parenting, non-marital households, and the First Amendment religion clauses. She is faculty advisor to the law school’s Civil Rights Law Journal, and the Latino/a Law Student Association, a Member of the Holy See’s Dicastery for Laity, Family and Life (Vatican City), a board member of Catholic Relief Services, a member of the Executive Committee of the AALS’ Section on Law and Religion, and an ABC news consultant. She cooperates with the Permanent Observer Mission of the Holy See to the United Nations as a speaker and a delegate to various United Nations conferences concerning women and the family.

In addition to her books, and her publications in law reviews and other academic journals, Professor Alvaré publishes regularly in news outlets including the New York Times, the Washington Post, the Huffington Post, and CNN.com. She also speaks at academic and professional conferences in the United States, Europe, Latin America and Australia.

Prior to joining the faculty of Scalia Law, Professor Alvaré taught at the Columbus School of Law at the Catholic University of America; represented the U.S. Conference of Catholic Bishops before legislative bodies, academic audiences and the media; and was a litigation attorney for the Philadelphia law firm of Stradley, Ronon, Stevens & Young.

Professor Alvaré received her law degree from Cornell University School of Law and her master’s degree in Systematic Theology from the Catholic University of America.

More on the topic of
Roe v. Wade