More on the topic of
Church and State

Many have missed the deep religious significance of Russia’s recent wars, from the “holy war” against ISIS in Syria to recovery of sacred spaces in the Crimea. Dr. Eric Patterson of the Religious Freedom Institute will identify key features of Russia’s religious diplomacy across the Orthodox world and key religious aspects of Russia’s geo-politics, from Purim’s necklace to Ukrainian denominationalism. 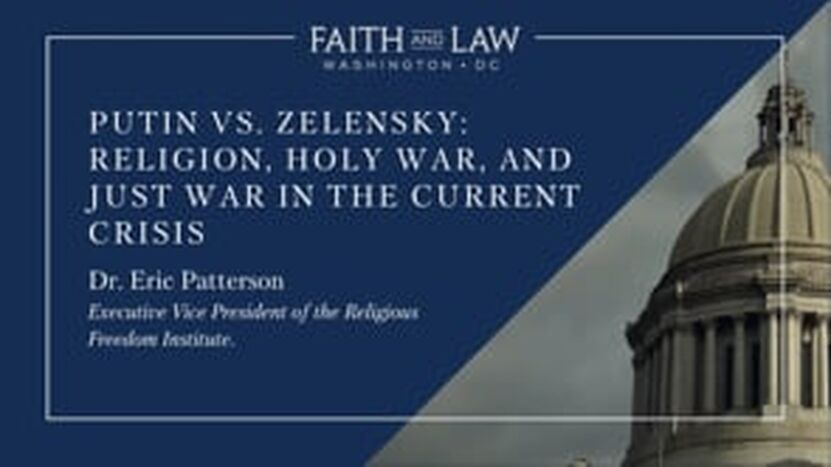 Eric Patterson, Ph.D. serves as Executive Vice President of the Religious Freedom Institute. Patterson is scholar-at-large and past dean of the Robertson School of Government at Regent University and a Research Fellow at Georgetown University’s Berkley Center for Religion, Peace & World Affairs, where he previously served full-time. Patterson’s interest in the intersection of religion, ethics, and foreign policy is informed by two stints at the U.S. Department of State’s Bureau of Political-Military Affairs, with work in Afghanistan, Pakistan, Congo, Angola, and elsewhere. He has significant government service, including over twenty years as an officer and commander in the Air National Guard and serving as a White House Fellow working for the Director of the U.S. Office of Personnel Management.

Patterson is the author or editor of over a dozen books, including Politics in a Religious World: Toward a Religiously Informed U.S. Foreign Policy (2012), Just American Wars: Ethical Dilemmas in U.S. Military History (2019), Ending Wars Well (2012), Ethics Beyond War’s End (2012), and Military Chaplains in Iraq, Afghanistan (2011). He has also published on religious freedom, democracy, and democratization in International Studies Perspectives, Review of Faith and International Affairs, Public Integrity, and the International Journal of Religious Freedom. In addition to articles in scholarly journals such as Survival, Journal for the Scientific Study of Religion, and Security Studies his work has been published in popular outlets like The Washington Post and Washington Times.

Patterson has provided briefings and seminars for multiple government agencies, including France’s Ministry of Defense, U.S. Department of State, U.S. Central Command, U.S. European Command, U.S. Naval War College, U.S. Naval Postgraduate School, the U.S. military academies, and many others. Patterson holds a Ph.D. in Political Science from the University of California at Santa Barbara and a Master’s in International Politics from the University of Wales at Aberystwyth.

More on the topic of
Church and State