More on the topic of
Christian Public Life

How should Christians arrive at political positions? How does Biblical political judgement differ from secular judgement? Is there a place to exercise Biblical judgment at all in our modern politics? 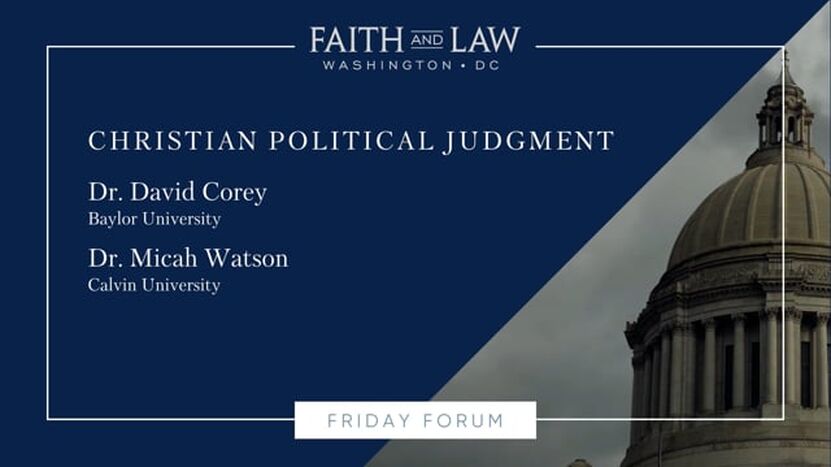 David Corey is a professor of Political Science focusing on political philosophy in the Honors Program at Baylor University. He is also an affiliated member of the departments of Philosophy and Political Science. He was an undergraduate at Oberlin, where he earned a BA in Classics from the College and a BMus in music from the Conservatory. He studied law and jurisprudence at Old College, Edinburgh before taking up graduate work in political philosophy at Louisiana State University. He is the author of two books, The Just War Tradition (with J. Daryl Charles) (2012) and The Sophists in Plato’s Dialogues (2015). He has written more than two dozen articles and book chapters in such venues as the Review of Politics, History of Political Thought, Modern Age, Interpretation: A Journal of Political Philosophy, and the Cambridge Dictionary of Political Thought. His current projects, Rethinking American Politics, and Liberalism & The Modern Quest for Freedom, examine the loss of healthy political association in the United States and offer strategies for reform.

Micah Watson is a native of the great golden state of California where he completed his undergraduate degree at U.C. Davis. He earned his M.A. degree in Church-State Studies at Baylor University in Waco, Texas, and holds M.A. and doctorate degrees in Politics from Princeton University. Professor Watson joined the faculty at Calvin College in the fall of 2015. He was also selected to serve as the William Spoelhof Teacher-Scholar Chair for the 2015-16 year, and became the Program Director for Calvin's new Politics, Philosophy and Economics (PPE) Program in 2020. Also in 2020, he became the Executive Director of the Henry Institute for the Study of Christianity and Politics and is currently the Paul B. Henry Chair in Political Science.

More on the topic of
Christian Public Life