More on the topic of
Criminal Justice

In celebration of Second Chance Month, we partnered with Prison Fellowship to gather a panel of experts, law enforcement leaders, and directly impacted voices for a discussion around improving outcomes among the one in three American adults with a criminal record.

We were excited for this opportunity to dive into ways to advance second chances, thoughtful alternatives to incarceration, and success in reentry. 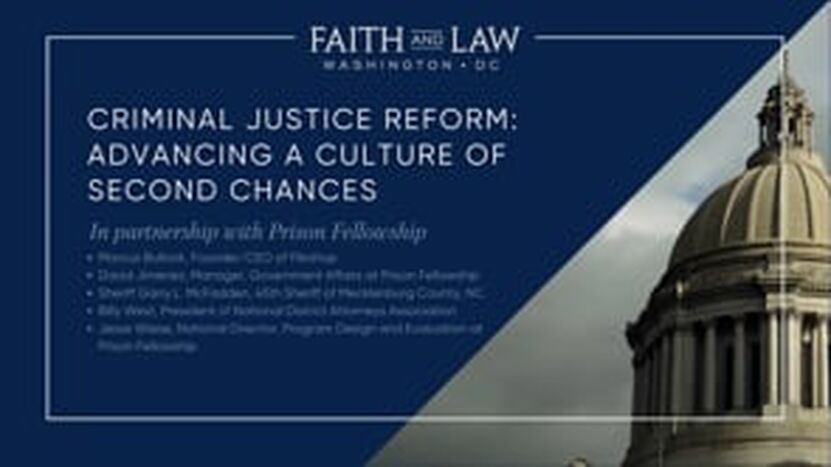 Marcus Bullock is an entrepreneur, justice reform advocate, and TED speaker. Following his 2004 release from prison, he launched a construction business that grew to employ other returning citizens. Bullock is also founder and CEO of Flikshop, Inc., a software company that builds tools to help incarcerated people stay connected to their families and build community.

The Flikshop mobile app enables families and non-profit organizations to send personalized postcards to any person in any cell in the US, with the mission of using social connections to decrease recidivism. He also founded the Flikshop School of Business, a program that teaches returning citizens life skills and entrepreneurship via computer coding and software development. As Forbes writes, “Will Flikshop, the Instagram for prisons, solve all of [the mass incarceration] issues? No. But Flikshop typifies the sort of work that needs support to scale to address these issues from many angles.”

Bullock is an inaugural cohort member of Techstars Anywhere 2018 and John Legend’s Unlocked Futures business accelerators. He was selected as one of The Root’s 2019 100 Most Influential African Americans in the US. Shortly after, Bullock was named a 2020 Halcyon Incubator Fellow. He is also a member of the Justice Policy Institute’s board of directors, Advisory Board member for Princeton University’s Prison Teaching Initiative, and serves as an advisor to the Georgetown University McDonough School of Business and Aspen Institute’s Opportunity Youth Incentive Fund. Married with two children, Bullock’s story has received coverage from Forbes, CNN, Washington Post, Black Enterprise, and NPR.

Sheriff Garry L McFadden is a thirty-six-year veteran of the Charlotte Mecklenburg Police Department (“CMPD”) and is one of the most decorated law enforcement officers in the history of CMPD. He spent thirty years as a detective and twenty years in the homicide unit. After a stellar career, Sheriff McFadden retired from Charlotte Mecklenburg Police Department on July 31, 2011 and was immediately re-hired by the City of Charlotte and assigned to work in the Office of the Chief to the Community Relations Unit to help implement programs within the community.

As a detective, Sheriff McFadden has been featured on; American Most Wanted, The First 48 and The Justice Files and a contributor to People magazine and other national media outlets.

On June 14, 2016, Investigative Discovery channel presented “I Am Homicide” a docuseries highlighting a few of Sheriff McFadden’s most complex homicide cases as a homicide detective with the CMPD that he worked over the span of three decades. The début of this nationally and international television show allowed Sheriff McFadden to be the first African American Law Enforcement Officer to have his own television show.

On May 8th, 2018 the voters of Mecklenburg County in North Carolina elected McFadden as their next Sheriff making him the first African American Sheriff in the history of the county.

Garry has been married to Cathy G. McFadden for the past 30 years with three adult children and one amazing grandson.

Billy West was born and raised in Cumberland County. He attended North Carolina State University, where he received a Bachelor of Science Degree in Business Management. While at N.C. State, Billy was a four-year member of the golf team. He was Valedictorian of his graduating class and was named an Academic All American and the Atlantic Coast Conference’s Outstanding Male Scholarship Athlete. Billy received his Law Degree from the Norman Adrian Wiggins School of

Law at Campbell University, where he received the Fred O. Dennis Award for outstanding representation of the School of Law to the community, the profession, and the public.

While District Attorney, Billy has created a repeat offender program to identify and successfully prosecute offenders who continue to commit serious crimes in his community. Billy and his staff have also partnered with law enforcement and others in the court system on initiatives such as: the Nation’s second Human Trafficking Court, the Southeast’s first Law Enforcement Assisted Diversion Program, North Carolina’s first Veterans Court, the Gun Violence Task Force, Drug Court, Sobriety Court, an annual Expungement Clinic, and a Driver’s License Restoration Program.

Billy is an active member of the community. He currently serves on the North Carolina Human Trafficking Commission, Cumberland County Justice System Advisory Council, and serves as a board member for the Fayetteville Police Foundation and the Fayetteville Academy. Billy has also served on the North Carolina Chief Justice’s COVID-19 Task Force and the North Carolina House of Representative’s Select Committee on Community Relations, Law Enforcement, and Justice. Billy also served on the Executive Working Group comprised of State Prosecutors, State Attorney Generals, and members of the Department of Justice.

Billy is married to Suzanna West. Suzanna and Billy have two children, Will and Lila.

Jesse Wiese serves as national director of program design and evaluation at Prison Fellowship, the nation’s largest outreach to prisoners, former prisoners, and their families. He served seven-and-a-half years for robbery in the Iowa prison system and subsequently earned his law degree. Wiese is a powerful advocate for criminal justice solutions that prioritize proportionate accountability, community participation, and second chances.

In 2006, he began working with Prison Fellowship as a reentry specialist, establishing community support networks for men being released from prison. After graduating from law school, Wiese rejoined Prison Fellowship in 2012 as a policy analyst, joining his personal experience and legal expertise to advance policies based on human dignity. Today, Wiese manages Prison Fellowship’s program design and evaluation and the expansion of Prison Fellowship’s Good Citizenship ModelTM, an innovative approach to measuring success in the prison system.

Wiese shares his unique insights with a broad spectrum of stakeholders, including state legislatures, universities, and businesses. He has testified before Congress and several state legislatures. He also served as lead amicus curiae plaintiff before the United States Supreme Court in Holt v. Hobbs, a case concerning religious free exercise in prison. Wiese has helped shape criminal justice dialogue through coverage in in the Wall Street Journal, Fox News, National Journal, CBN, The Christian Post, and numerous other media outlets.

David Jimenez serves as the manager of government affairs for Prison Fellowship’s advocacy and public policy team, where he oversees federal and state legislative campaigns. His background is in public policy advocacy and institution building, most recently as a primary manager for the American Enterprise Institute’s outreach to college students, faculty, and administrators. After graduating from Bowdoin College in Maine, Jimenez participated in the Hudson Institute’s Political Studies Fellowship and was a Fulbright English teaching assistant in Romania.

A proud alumnus of Prison Fellowship’s internship program, he first became passionate about criminal justice reform while serving urban youth in New Jersey, where he saw up close the urgent need for restorative approaches to incarceration, law enforcement, and violence. A Pittsburgh native, Jimenez lives in the Columbia Heights neighborhood of Washington, D.C.

More on the topic of
Criminal Justice