Dr. William Inboden, Executive Director and William Powers, Jr. Chair at the Clements Center for National Security at the University of Texas-Austin joined us to discuss how Reagan’s strategy to defeat Soviet communism holds important lessons for America’s competition with China today. 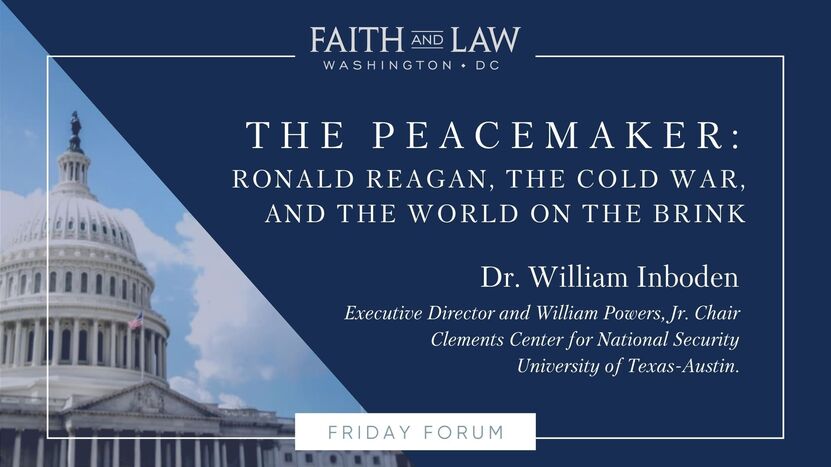 William Inboden is Executive Director and William Powers, Jr. Chair at the Clements Center for National Security at the University of Texas-Austin. He also serves as Associate Professor at the LBJ School of Public Affairs, Distinguished Scholar at the Robert S. Strauss Center for International Security and Law, and Editor-in-Chief of the Texas National Security Review. Inboden’s other current roles include Associate with the National Intelligence Council, member of the CIA’s Historical Advisory Panel, member of the State Department’s Historical Advisory Council, Senior Fellow with the Trinity Forum, Steering Committee for the Reagan Institute Strategy Group, and member of the Advisory Board for the Vandenberg Coalition. Previously he served as Senior Director for Strategic Planning on the National Security Council at the White House, where he worked on a range of foreign policy issues including the National Security Strategy, strategic forecasting, democracy and governance, contingency planning, counter-radicalization, and multilateral institutions and initiatives. Inboden also worked at the Department of State as a Member of the Policy Planning Staff and a Special Advisor in the Office of International Religious Freedom, and has worked as a staff member in both the United States Senate and the House of Representatives.

Inboden has also served as head of the London-based Legatum Institute, and as a Civitas Fellow at the American Enterprise Institute. He is a life member of the Council on Foreign Relations, and his commentary has appeared in numerous outlets including the Wall Street Journal, New York Times, Washington Post, Los Angeles Times, USA Today, Politico, The Hill, World, Weekly Standard, NPR, CNN, and BBC. He has lectured widely in academic and policy settings, testified before the U.S. House Armed Services Committee and the US Congress Commission on Security and Cooperation in Europe, and received numerous research and professional development fellowships. Inboden is the author of Religion and American Foreign Policy, 1945-1960: The Soul of Containment (Cambridge University Press), co-editor of The Last Card: Inside George W. Bush’s Decision to Surge in Iraq (Cornell University Press), co-editor of Hand-Off: The Foreign Policy That George W. Bush Bequeathed to Barack Obama (Brookings Institution Press), and has published numerous articles and book chapters on national security, American foreign policy, and American history. His book on the Reagan Administration’s national security policy, titled The Peacemaker: Ronald Reagan, The Cold War, and the World on the Brink, is forthcoming in November, 2022 with Dutton, a Penguin Random House imprint.

Professor Inboden has received multiple teaching awards including recognition as a “Texas 10” by the Texas Exes Alumni Association, selection as “Lecturer of the Year” at the LBJ School, and his classes Presidential Decision-making in National Security and Ethics and International Affairs have been voted as "Best Class in the LBJ School" and “Class Most Likely to Challenge Your Assumptions.” Inboden received his Ph.D. and M.A. degrees in history from Yale University, and his A.B. in history with honors from Stanford University. He lives in Austin, Texas with his wife and two sons, and is a member of Redeemer Presbyterian Church.