Nov 12 Religious Freedom in Healthcare: Can we both serve the poor and protect Christian doctors and nurses? RSVP

More on the topic of
Leadership Qualities

Our country is living through a social crisis, to which many Americans have responded with populist anger at our institutions, and metaphors of destruction to describe the path forward: cleaning house, draining swamps. But now is not a time to tear down. It is a time to build and rebuild by committing ourselves to the institutions around us. From the personal and local to the national and political, these institutions provide the forms and structures we need to be free. By taking concrete steps to help them be more trustworthy, we can renew the ties that bind Americans to one another. 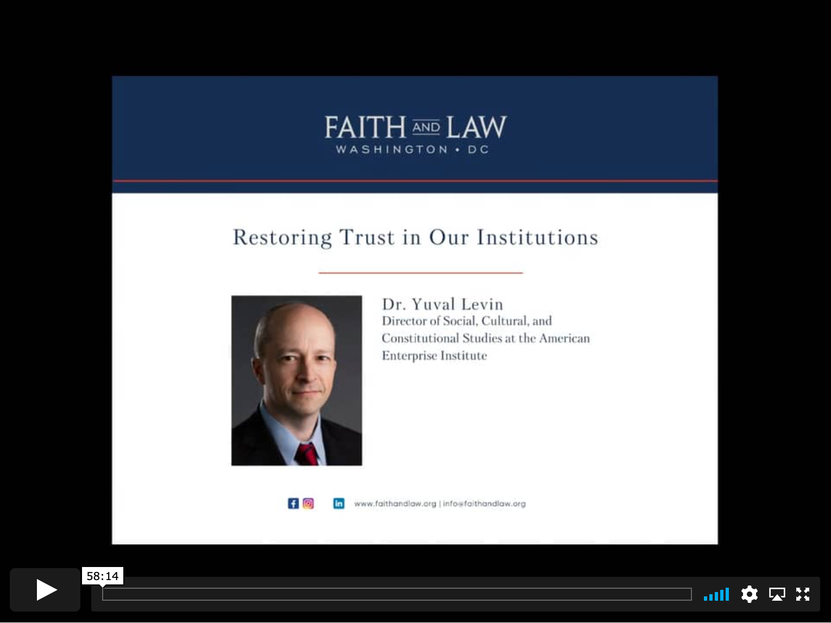 Dr. Yuval Levin is the director of Social, Cultural, and Constitutional Studies at the American Enterprise Institute (AEI). He also holds the Beth and Ravenel Curry Chair in Public Policy. The founding and current editor of National Affairs, he is also a senior editor of The New Atlantis and a contributing editor to National Review.

Dr. Levin and scholars in the Social, Cultural, and Constitutional Studies research division study the foundations of self-government and the future of law, regulation, and constitutionalism. They also explore the state of American social, political, and civic life, while focusing on the preconditions necessary for family, community, and country to flourish.

Dr. Levin served as a member of the White House domestic policy staff under President George W. Bush. He was also executive director of the President’s Council on Bioethics and a congressional staffer at the member, committee, and leadership levels.

In addition to being interviewed frequently on radio and television, Dr. Levin has published essays and articles in numerous publications, including The New York Times, The Wall Street Journal, The Washington Post, and Commentary. He is the author of several books on political theory and public policy, most recently “A Time to Build: From Family and Community to Congress and the Campus, How Recommitting to Our Institutions Can Revive the American Dream” (Basic Books).

He holds an MA and PhD from the Committee on Social Thought at the University of Chicago.

More on the topic of
Leadership Qualities