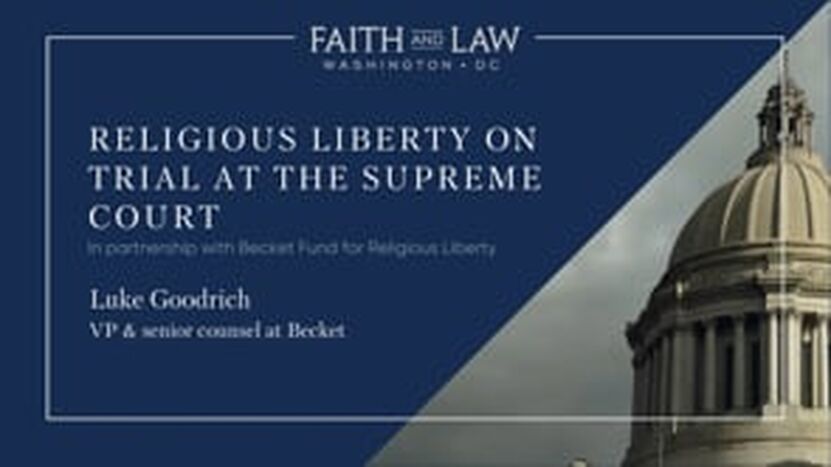 Luke Goodrich is VP & senior counsel at Becket, where he represents religious organizations and individuals in religious liberty disputes in courts across the country, including in the Supreme Court. He is an adjunct professor at the University of Utah S.J. Quinney College of Law, where he teaches constitutional law. And he is the award-winning author of Free to Believe: The Battle Over Religious Liberty in America, which has helped thousands of Americans understand why religious freedom matters, how it is threatened, and how to protect it.

Since joining Becket in 2008, Luke has argued and won precedent-setting cases in the Third, Fifth, Seventh, Ninth, and Eleventh Circuits, including the landmark decision protecting housing allowances for ministers. He was appointed a Special Assistant Attorney General for the State of Colorado to argue a case on behalf of Becket and several states. And he has played a role in each of Becket’s pathbreaking victories in the Supreme Court, including Little Sisters of the Poor v. Burwell, Burwell v. Hobby Lobby, Holt v. Hobbs, and Hosanna-Tabor v. EEOC.

Dubbed “a top religious freedom attorney” by the Associated Press, Luke often appears in the national media to discuss religious liberty issues, such as on CNN, Fox News, ABC World News, PBS, and NPR. He has also been published or quoted in major outlets like the Wall Street Journal, Washington Post, and New York Times.

Before joining Becket, Luke was an appellate attorney at Winston & Strawn in Washington, D.C., and an advisor in the human trafficking office at the U.S. Department of State. Before that, he clerked for Judge Michael W. McConnell on the U.S. Court of Appeals for the Tenth Circuit.