More on the topic of
Technology

U.S companies are the driving force behind global innovation and the advancement of emerging technologies. A deeper understanding of God’s creativity and our roles as image-bearers can help Christians working on Capitol Hill shape policy that will encourage ingenuity and maintain America's technological cutting-edge while protecting intellectual property.

Phoebe Miles, co-founder of the Cade Museum for Creativity and Invention and daughter of the inventor of Gatorade and Dr. James Edwards, former Hill staffer and consultant on intellectual property discussed how the Creation Mandate and Common Grace relate to human innovation and human flourishing. 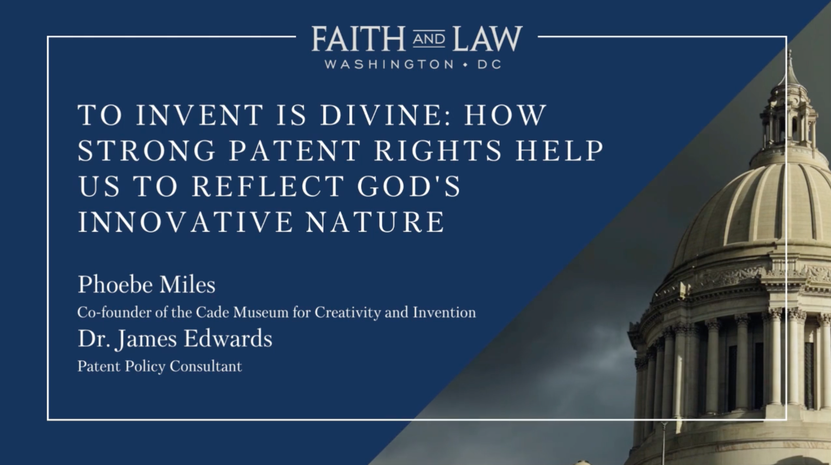 Phoebe Miles is the Co-founder of the Cade Museum for Creativity and Invention in Gainesville, Florida. The museum, named after Gatorade inventor (and Ms. Miles’ father) James Robert Cade, exists to transform communities by inspiring and equipping future inventors, entrepreneurs, and visionaries. In 2017 the Museum opened a 21,000-sf. building that was later named the best new building project in the southeastern United States. It is a 501(c)(3) non-profit corporation, which received public foundation status in 2018.

The original content of the Cade Museum features hands-on creativity and STEM classes, online videos, rotating exhibits, a weekly Radio Cade podcast, and the Cade Prize, a preeminent annual competition for inventors and entrepreneurs that has awarded $600,000 in seed prizes to date. Ms. Miles designed the Museum’s proprietary education curriculum, Invent Possible, a framework for lifelong STEM learning through the lens of invention. Invent Possible teaching units are tied to Next Generation Science Standards and will be available to teachers at all grades.

A native of Gainesville, Ms. Miles graduated Phi Beta Kappa and received a B.A. in German, a B.A. in History, and a teacher’s certificate from the University of Washington in 1987. She is fluent in German and working on Spanish, Mandarin, and French. From 1988-2006, she and her husband spent over a decade living and working overseas in Germany, Barbados, and Argentina. They have lived intermittently in Washington D.C. since 1992 and have three adult children and one granddaughter.

Dr. James Edwards advises companies, trade associations, and conservative organizations on patent policy and is Co-Director of the Inventor’s Project. He participates in the Medical Device Manufacturers Association’s Patent Working Group. Edwards mentors start-ups and early-stage companies, largely in the med tech space, and is involved in several IP-centric projects.

Edwards served as Legislative Director to Rep. Ed Bryant, R-Tenn., then a member of the U.S. House Judiciary Committee, and handled IP legislative matters. Edwards also worked on the staffs of Rep. John Duncan, R-Tenn., the U.S. Senate Judiciary Committee, and Sen. Strom Thurmond, R-S.C. In addition, he was an association executive at the Healthcare Leadership Council. Edwards earned a Ph.D. at the University of Tennessee, and bachelor’s and master’s degrees at the University of Georgia.

More on the topic of
Technology