Jul 15 Child Care: Should the Government Pay for It? RSVP

More on the topic of
Immigration

The United States is facing a moral crisis prompted by rapid increases in cross-border migration and global displacement. For too long, the debate around immigration policy has been framed with false choices that have resulted in political stalemates at a great human cost. Crisis after crisis, Americans are asked to choose between security and unbridled compassion. Is there a better way to safeguard our immigration system while welcoming the stranger?

Join us and The LIBRE Institute for a discussion on a better way forward guided by faith. Our panel will discuss the current crisis facing our country and potential paths to achieving a more secure, humane, orderly, and moral immigration system. 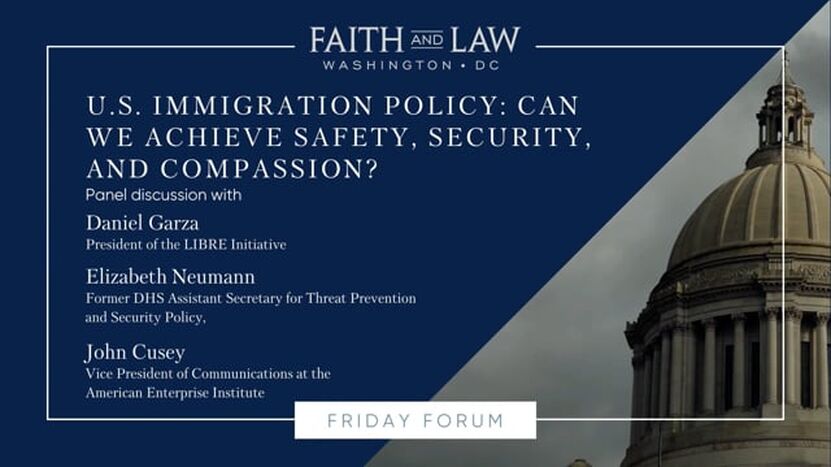 Daniel Garza is the president of the LIBRE Initiative. Born in the Central Valley of California, he would migrate with his family annually from their ancestral hometown of Garza Gonzalez in Nuevo Leon, Mexico- throughout California, Nebraska and Washington State following the crop season as farm workers until he was 19 years of age.

Mr. Garza began his in public service career as congressional staff assistant for U.S. congressman Richard "Doc" Hastings and was later elected as councilman for the city of Toppenish, Washington in 1996. In 2001, he was tapped by the George W. Bush Administration to serve as Deputy Director of External and Intergovernmental Affairs in the Office of the Secretary at The Department of Interior, and was appointed in 2004 to Associate Director of the Office of Public Liaison in the White House. In 2007, Daniel joined Univision to host and co-produce "Agenda Washington", a weekly Spanish-language news talk show covering the issues impacting the U.S. Hispanic community. Mr. Garza was appointed to serve on the Board of The Harvard Journal of Hispanic Policy in 2016, was designated as one of Washington, D.C.’s “Influentials” by Congressional Quarterly Magazine in 2018, and in 2019, Daniel was named 1 of the 50 most influential voices in Washington DC by The National Journal.

Elizabeth Neumann served during the George W. Bush administration managing President Bush’s Faith-Based and Community Initiatives, which involved working with the Departments of Education and Housing Development. From 2003 to 2005, Neumann worked at the White House as part of the inaugural staff of the Homeland Security Council post 9/11. The job included working with the different government security agencies to counter terrorism. She was part of a team of officials that enacted several anti-terrorism measures. Neumann served as an executive assistant to Homeland Security Advisor, John A Gordon, shifting eventually to serve as a Homeland Security policy advisor for a year and as Associate Director of the Domestic Counterterrorism Directorate. As a director, she advised the presidential appointee on Homeland Security policy initiatives. Neumann left the Bush Administration and worked with the Senior Advisor to the Program Manager for the Information Sharing Environment, Office of the Director of National Intelligence, where she helped author and coordinate the implementation of key components of the 2007 White House National Strategy for Information Sharing.

Neumann joined DHS Secretary John Kelly as his Deputy Chief of Staff in 2017; and she served in the same capacity under Acting DHS Secretary Elaine Duke. In 2018, Neumann transitioned into her role as DHS Assistant Secretary for Threat Prevention and Security Policy, where she served until her resignation in April 2020.

John Cusey is the Vice President of Communications at the American Enterprise Institute (AEI). He has a long record of government service including working for multiple presidential administrations and members of Congress. In 2019, John served in the Office of Refugee Resettlement at the Department of Health and Human Services. In his time on Capitol Hill, he served as the Executive Director of the Bipartisan Congressional Pro-life Caucus for five years with Congressman Chris Smith and as the Legislative Director and Press Secretary for Congressman Gary Miller for two years. Prior to working in DC, John worked for three different Members of the California State Legislature where he focused on budget issues.

More on the topic of
Immigration