More on the topic of
Human Trafficking

From the private to the public sectors, there is consensus that modern slavery exists and that it is wrong; yet around the world, prosecutions, victim identification, and quality victims services are all in decline. It is an urgent problem and demands our attention and action—but how do we solve human trafficking and other human rights issues today?

Ambassador John Cotton Richmond joined us for a conversation on modern slavery and current trends. He spoke about why cultivating a deep understanding of inherent human dignity provides common ground and hope for policymakers collaborating across the political aisle in advancing human rights, stopping perpetrators, and protecting victims through thoughtful and wise actions and policies. 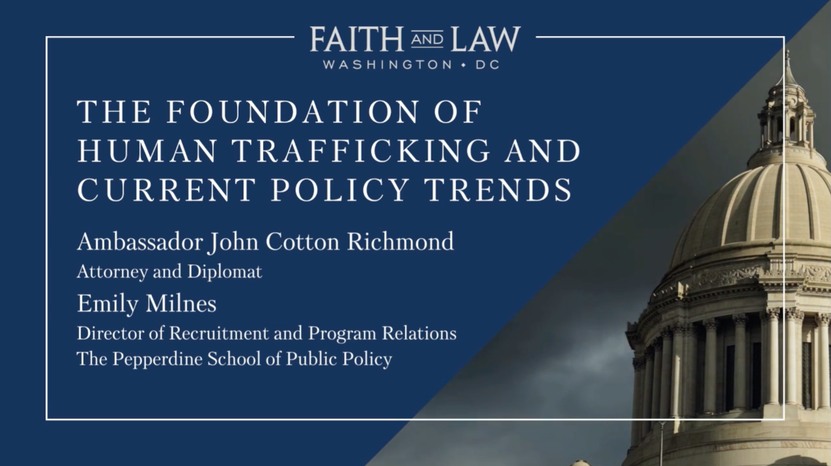 Ambassador John Cotton Richmond is an attorney and diplomat focused on ethical business, human rights, democracy, and rule of law. His career has taken him to the front lines in the global battle against human trafficking. Ambassador Richmond currently serves as a Partner at Dentons, the world’s largest law firm, where he focuses on the intersection between business and human rights. He advises companies on how to keep their supply chains free of forced labor and their workforces free of sex trafficking.

Previously, the U.S. Senate unanimously confirmed Ambassador Richmond and he served as the U.S. Ambassador to Monitor and Combat Trafficking in Persons from 2018 to 2021. Serving in the nation’s highest-ranking position dedicated to human trafficking, he led U.S. foreign policy related to modern slavery and coordinated the U.S. government’s response to the crime.

Ambassador Richmond also served for over a decade as a federal prosecutor with the U.S. Department of Justice’s Human Trafficking Prosecution Unit, where he prosecuted numerous victim-centered labor and sex trafficking cases. He also lived in India for three years pioneering International Justice Mission’s slavery work.

Ambassador Richmond has received numerous honors and commendations, including being named a “Prosecutor of the Year” and receiving the “Wilberforce Award for Exceptional Leadership in the Fight Against Human Trafficking” and the “David Alred Award for exceptional contributions to civil rights”. His work caused the former head of the FBI’s human trafficking program to call him “every trafficker’s worst nightmare”.

Ambassador received his undergraduate degree from the University of Mary Washington and his law degree from Wake Forest University. Ambassador Richmond is a Senior Fellow at the Atlantic Council, Senior Advisor to Love Does, and frequent speaker on topics of faith, justice, and vocation. He lives in Virginia with his talented wife and they have three wonderful children.

More on the topic of
Human Trafficking