More on the topic of
Welfare

There is much public outcry about the Supreme Court's leaked draft majority opinion in Dobbs v. Jackson Women's Health. Passions are high on both sides of this issue, further fracturing an already divided nation. However, there is one thing that both proponents and opponents of Roe can agree on -- women and children deserve to be empowered with real options and comprehensive care.

Studies have shown that approximately 75% of pregnant women seeking abortion would prefer to parent if their circumstances were different. We partnered with Human Coalition to discuss pro-birth and pro-life solutions that can help make abortion unnecessary and unthinkable. 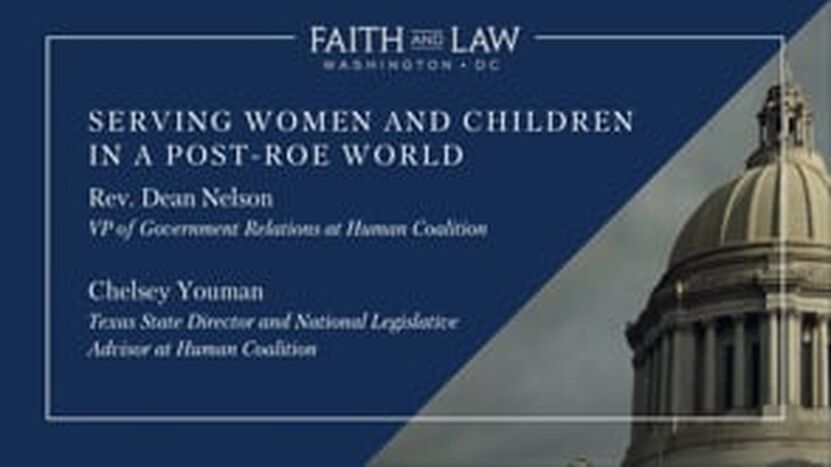 Dean Nelson is responsible for advancing the Culture of Life in the political sphere, by building bridges, coalitions, and partnerships. He brings to Human Coalition more than 20 years of demonstrated success directing nonprofit organizations, with an emphasis on urban strategies, grassroots organization, and national leadership training. Before taking the role as executive director of Human Coalition Action, Rev. Nelson faithfully served Human Coalition as the church outreach director for five years.

Rev. Nelson was recently appointed by Maryland Governor Larry Hogan to serve on the congressional Frederick Douglass Bicentennial Commission whose mission is to honor the life and legacy of Frederick Douglass.

Rev. Nelson has worked for other major pro-life and Christian organizations, including Global Outreach Campus Ministries and Care Net, where he managed an annual budget of more than $1 million. As part of Wellington Boone Ministries’ senior strategic planning team, Rev. Nelson helped plant ministries in capital cities such as Richmond, Virginia; Atlanta, Georgia; Raleigh, North Carolina; and Washington, D.C. And United Way recognized him for his work in bringing people together for a common cause. Rev. Nelson serves as the chairman of the board for the Douglass Leadership Institute. He is a sought-after speaker, giving frequent interviews on ABC and NBC affiliate networks in Washington, D.C. He’s appeared on the 700 Club, CBN News, and MSNBC, as well. And he is a frequent guest on Christian radio programs, including the Bott Radio Network and American Family Radio.

Chelsey’s professional experience includes working as senior counsel and chief of staff for First Liberty Institute, concentrating on religious liberty matters and First Amendment rights. At First Liberty Institute, she litigated on behalf of and advised hundreds of clients regarding conscience rights nationwide. Chelsey has also worked in private practice, where she successfully litigated corporate fraud matters, complex commercial litigation, and consumer rights issues in both federal and state jurisdictions.

Chelsey holds a Bachelor of Arts degree in Political Science from Texas A&M, and a J.D. from Southern Methodist University.

More on the topic of
Welfare